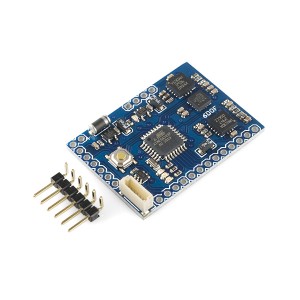 Why "+" in the name? Because it's an Inertial Measure Unit (sensors and hardware filter circuitry) plus an Arduino-compatible processor that can run Attitude Heading Reference System (AHRS) code, based on Bill Premerlani's DCM algorithm. This hardware consists of a 3 axis accelerometer and three gyro sensors, dual power regulator (3.3v and 5v), GPS port, an Atmega328@16mhz and a lot of status LED's. This IMU can serve as a replacement for ArduPilot's thermopile sensors with the 2.51 code and above. This IMU improves upon the first release in that the high-pass filter, which was reducing the effeciency of the DCM code, has been removed.